LINDA’S NAME IS WELL KNOWN TO REFUGEES IN BULGARIA. SOMETHING LIKE A HARBOUR FOR WOMEN, A COUNSELLOR TO MEN, SOMETHING LIKE THE LIGHT AT THE END OF THE TUNNEL OR, SAID IN A DIFFERENT WAY, THE HOPE WITHOUT WHICH IT IS IMPOSSIBLE TO LIVE.

If we continue with the associations, she can be compared to the six-hand Shiva, nonetheless she is a Christian and born in Iraq. In 1994, Linda Awanis came to Bulgaria with her husband, famous chef Freddy Benjamin and their two children. After the usual difficulties in the life of a refugee, she established the Council of Refugee Women in Bulgaria and actively supported people who, like her, were forced to seek a better life abroad. 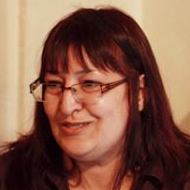 Founder of the Council of Refugee Women in Bulgaria

Linda is smart. She has command of Assyrian, Arabic, English, and Bulgarian. Because of the help given to thousands of people – help with translation, training, liaison with employers, help with enrollment in school, enrollment with a GP, giving donations, advocacy to institutions and the media and much more, she is one of the characters we want to meet with all the visitors to the Solidarity Museum. We cannot all be like Linda. But the least we can do is to get to know her story.

Linda, how did you decide to establish the Council of Refugee Women in Bulgaria?

Years ago, the Bulgarian Red Cross (BRC) had invited me to a three-day social refugee orientation training course. Then I worked as a translator in the organization. And during the course we were encouraged, if we had ideas, to share them. Then I decided to propose the establishment of special refugee organization. We had already overcome the problems, but with many difficulties because there was no one to help us. So we decided that now we can help. Yes, but the men judged that there was no one to believe us, that no one would cooperate and support. We ended up all women. However, we shared our idea with the BRC and the United Nations High Commissioner for Refugees, they liked it and we started work. At that time, we had two main tasks. One was for the Bulgarians to believe that refugee women can work both with women and men. Our other goal was to reach the refugee men and explain them that the fact they went to live in a European country will not change their wives. Yes, they have more freedom here, but that does not mean that they will change their attitude towards their family and stop listening to and respecting their fathers and men. With these ideas, we created our organization, and, thank God, we were getting support.

What was your profession before you came to Bulgaria. Have you been involved in social activities before?

No. But that’s in our blood. For example, in our neighbourhood every holiday we organized charity bazaars and we help adults and poor people with the funds collected. And so far, when I saw someone having a problem, I immediately help. Even if they say to me: He does not ask for help from you, leave it, I cannot be indifferent. Otherwise, in Iraq, I had the right to study up to the 12th grade, but I did not have the right to graduate from university and to have state employment. So I learned typing and started working with foreigners. In the morning I worked in an English company with 70 engineers. I was appointed as a secretary, but they had a constant need for my personal help anyway. They were ringing when they were sick, I was taking them to doctors, some of the health problems required them to go back to England, and I had to go to the Migration Directorate and arrange an emergency exit visa for them. But I never thought it might be a profession. On the afternoons I worked in a Lebanese company that was mixed – we had people from both Egypt and India; I was the only Iraqi woman and the only woman. The English firm was in the same way, but eventually there was lots of work and an English woman was appointed. Actually here in Bulgaria I started working with women for the first time.

You say that in your organization you help men overcome cultural differences and allow women to integrate more easily. Was it difficult for you?

Yes, because in the beginning there were many problems in refugee families. Interestingly, then men came to me to share them. Whether they really had problems or wanted to see how we would react, I do not know. But in such cases, we were trying to solve the situation as we do in our countries. In Iraq, when there is a family problem between a man and a woman, if they cannot cope alone, the parents of the two sides usually intervene. If they fail, it includes the head of the kin, who gathers the men from the family and they solve the problem. The last instance is the state institution. In Bulgaria, at the beginning, we had quite complicated cases, and because we are believers, we called a refugee for help. It is different, however, to listen to one of your leaders rather than to listen to me. And when he himself saw how we solved the problems and that for us the most important thing is for families to be together, he did a great advertising for us. That was how things went by word of mouth, and then no one was afraid to come to us.

How did the Bulgarians accept you all these years?

From the moment I arrived, until the end of 2013 (the so-called European Migration Crisis), I had no problems. On the contrary – they were all very tolerant. Everyone was trying to help us, even though I did not even know Bulgarian. By the end of 2013, when a huge number of refugees entered Bulgaria, things started to change. At the moment, we have many difficulties of any kind, even when a refugee family gets the status, to find accommodation. It is equal to death. Just by saying a refugee, and nobody wants to let it go under rent. On the other hand, there are good people and they always help. In the warehouse where we collect donations, more than 90 % of them are from Bulgarian citizens. Unfortunately, however, none of them wants others to know that he/she is helping. I since 2014, ask them: Let us tell some media how you support us, what are your impressions. They always say they do not want to.

Why do you think it is so?

They worry about what others will say. Because they can often be asked the question: Why do you help the refugees and not help the Bulgarians? So they are unwilling to give interviews. Talks about us are really negative. They say many of the migrants are economic migrants, but not refugees. Yes, 1-2 % of these people may be looking for a better life, but it is not right for everyone to be put into the same mould.

Still, you’ve always found people who are keen to help you ….

That’s right. I remember how a young man, a Bulgarian, came once. He asked: Are you Linda? I said: Yes! And he gave us many things. The same day, I had a meeting with a Christian TV, to which he gave an interview while he left. I did not know about it, I did understand it only when I was watching the reportage. Then the reporter asked him how he met us. And he replied: Well, I first asked a lot of people to help them and everyone was telling me – go to Linda! The fact that people have full confidence in us makes me happy. It is also important that when we collect donations, we always ask people to bring them to the place where the donations are handed out. Many donors do not know where their stuff is going. As soon as they come to bring the donation themselves and see with their eyes how refugees receive them, this builds trust. 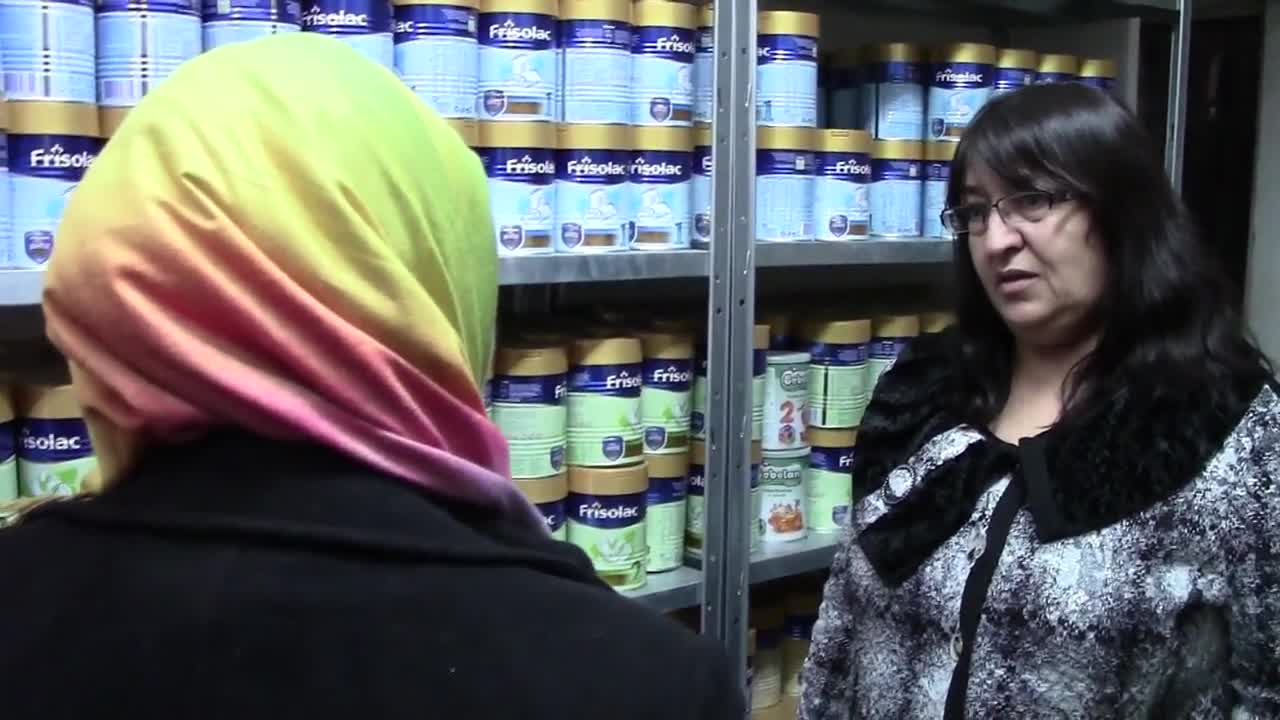 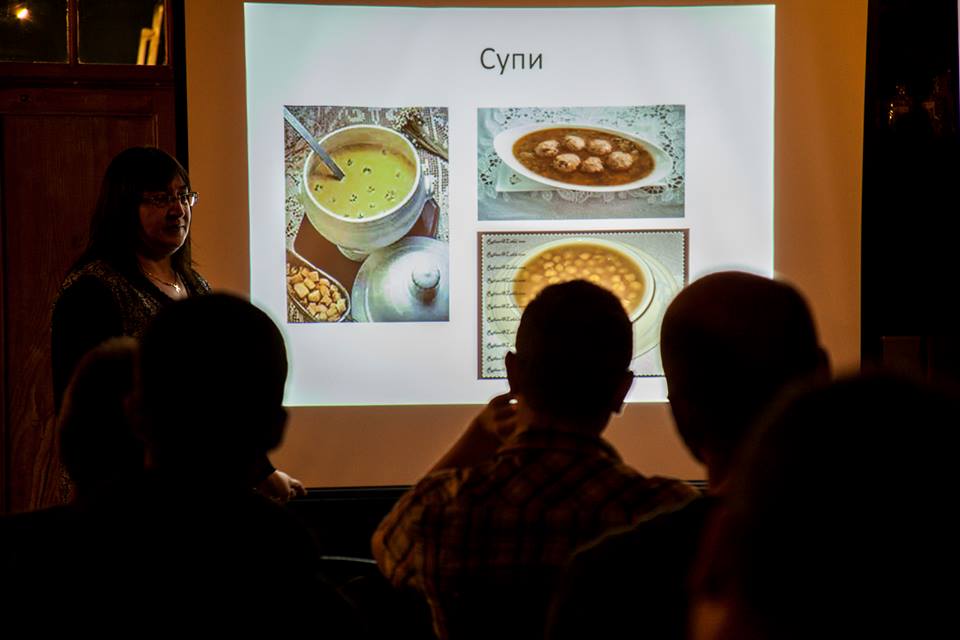 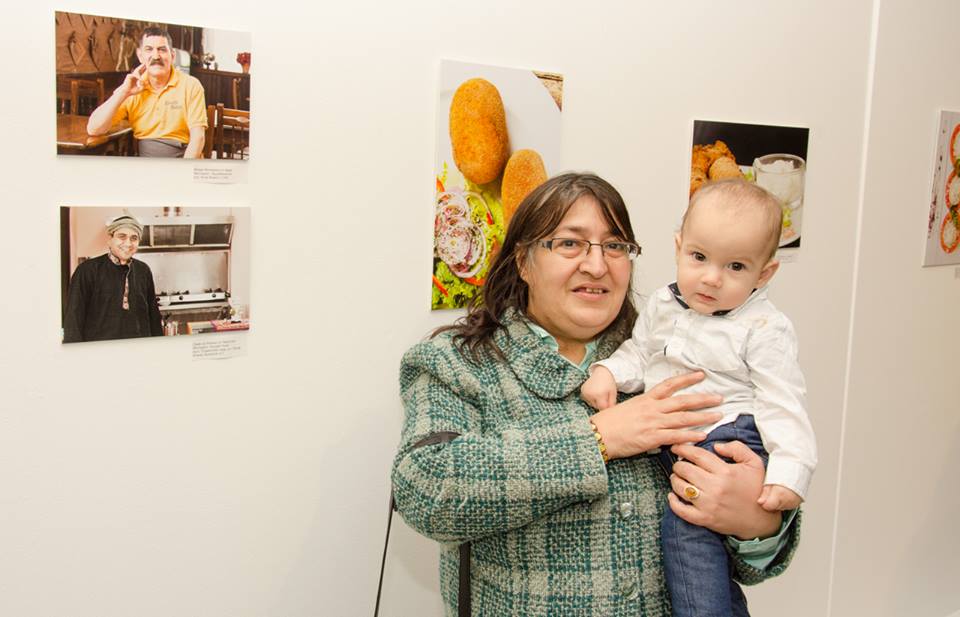 And is there solidarity between the refugees themselves?

They help each other, yes. People came to the centre and told me about others who do not want to come to us but really need help. If they do not rely on one another, it is really difficult. Another type of solidarity I have seen is when refugees are already living under rent. They came to me and they said to me: Linda, I have Bulgarian neighbours, a poor family – they do not have this, they do not have that, can you give them? I say: Okay, let them come, no problem. And next time they come with the Bulgarian family and with what I have, I help because the Lord says – as you give, I will give you a hundredfold. We live with this principle. We give. We do not know where it comes from. But solidarity among refugees is enormous.

What is the future you dream of?

I do not have any more to dream of. I have everything. I have a family. I have children, grandson, my job is a go. My dream is just to have peace. Because we are trying to integrate the refugees, but the most important thing is that there are no conflicts and wars so that they do not come. Everyone wants to live with dignity. When a family first comes to the centre to get help, they just look, do not touch anything, do not say anything. Or: Whatever you give us. And they start telling me what they had there – what houses, furniture, what cars, what kind of work they had. Everything is gone now and these people are coming to seek help. And their head is down. That’s the hardest. Therefore, the only thing I want with all my heart is peace. We are guests of this land. We are born in a second and in a second we go. No need for conflict. We must love each other. There is no love for us. When a person loves another, he will not hurt him, but will do absolutely everything to be good. No one has left his homeland without reason. My husband and I had decided not to go anywhere. We stay in Iraq and we are good, we have house, we have what we want – we have, you know? And there was love among us. But they did not leave us alone. There are no ten Christian families left in my neighbourhood, and I know everyone. But we were about 2,000 families. I was watching a film by a journalist who was making a film about Christian families in Iraq and filming my neighbourhood. I could not recognize the place where I was born and I lived until I left Iraq. I did not recognize my house! Our property is taken from us, they forged documents and it is no longer mine. And I had two houses – in the centre of Baghdad. For three days I left the country, if I had not, I would have died. I did not plan it, I lived normally; we missed nothing. Only freedom… 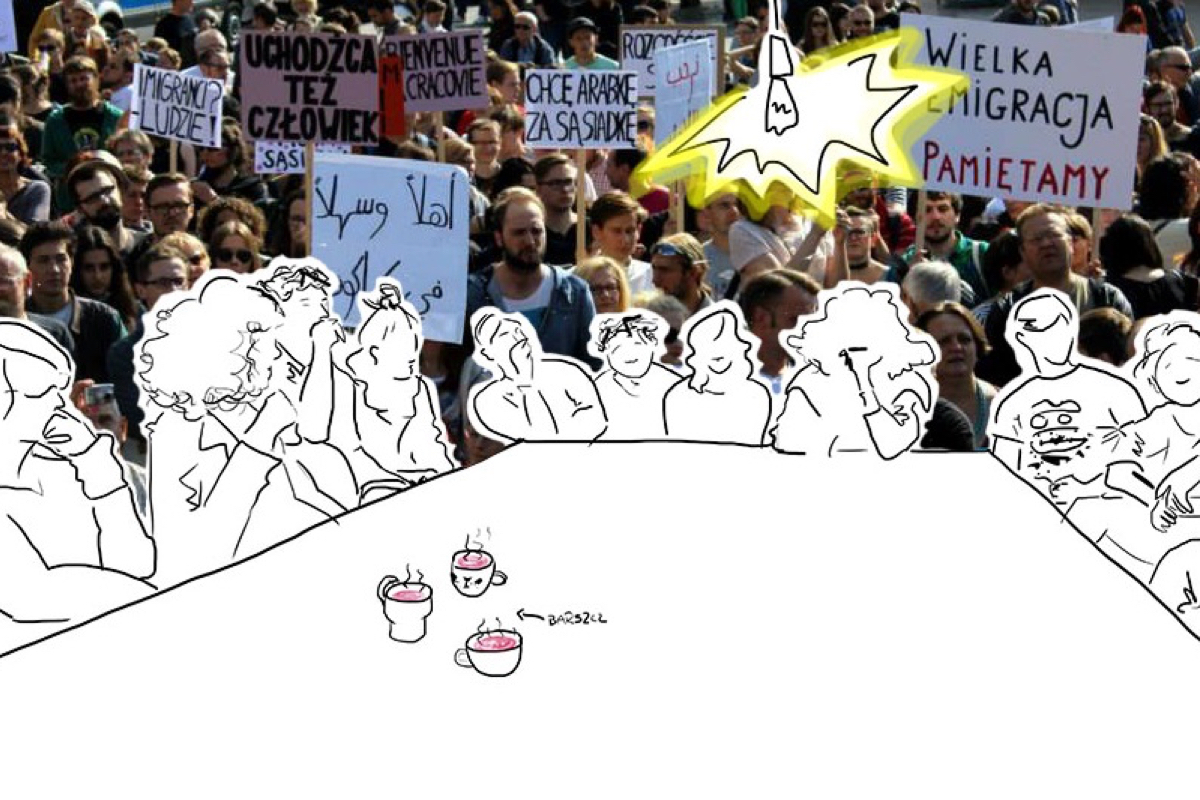 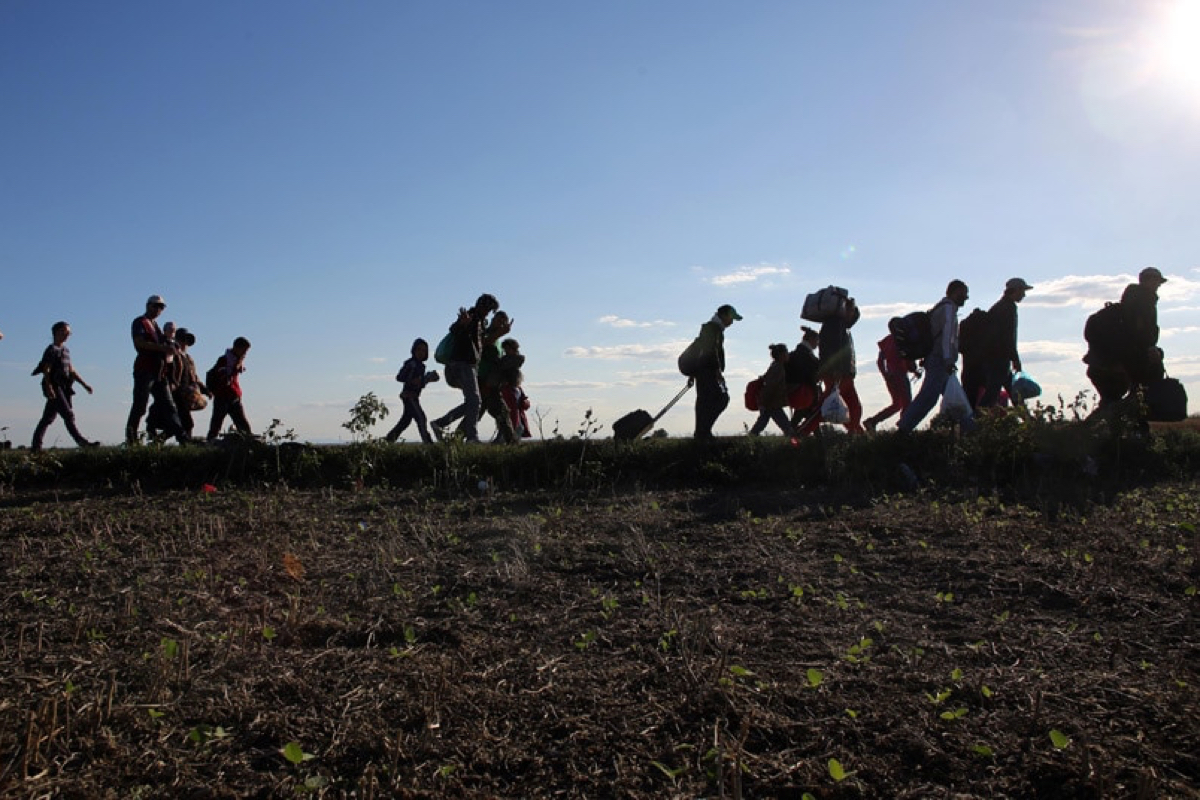 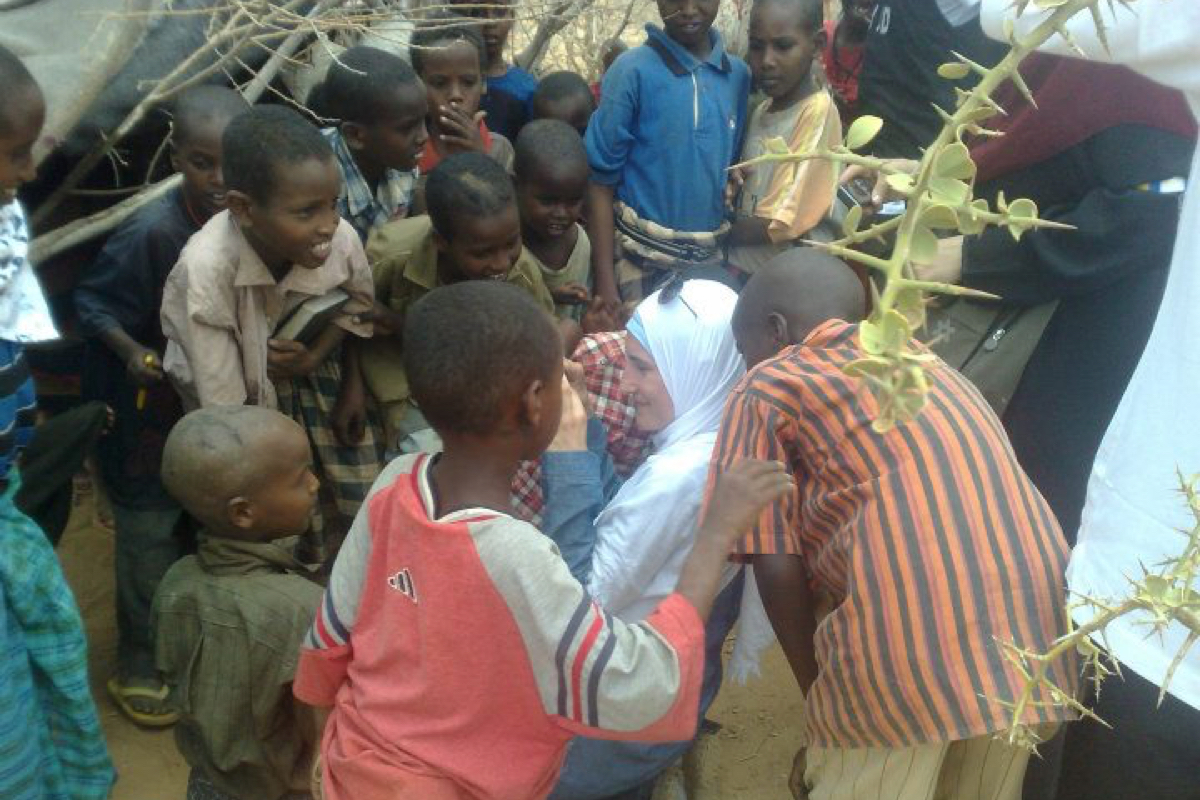